From the incubator to the world – congratulations Inari Sámi Wikipedia

Have you ever wondered about the process of launching Wikipedia in a new language and the importance of Wikipedia for indigenous languages? In light of the most recent language version to join we will shed some light on the process from incubator to Wikipedia in Inari Sámi.

Sámi knowledge online is a Wikimedia Norge project with the intention of improving the Northern Sámi Wikipedia and to provide more Sámi related content to the Wikimedia projects. But why is it so important to conserve and revitalise small, indigenous languages? Chairperson of the board of Wikimedia Norge, Sigrun Espe has been interested in this a long time. The title of her Master’s thesis is «Education and revitalisation, The role of bilingual education in processes of ethnic revitalisation in the Ecuadorian highlands. She says the language we grow up speaking is such an important part of who we are.

It is closely tied to our identity. For many indigenous people, their native tongue is also an important ethnic marker in a society dominated by a different culture and language. Strengthening an indigenous language online, can contribute to keep it current and alive for new generations. This is important not only for the language and the people who speak it, but for the history this language and it’s culture represents. Congratulations to the Inari Sámi Wikipedia community! Sigrun Espe, Chairperson, Wikimedia Norge

Infoboxes about Inari copied from Wikipedia on a background photo from the Inari region, 1925, by Samuli Paulaharju (1875-1944). The image is a part of the Finish Heritage Agency. Samuli Paulaharju, Public domain, via Wikimedia Commons

Inari Sámi is special among the Sámi languages because it is only spoken in Finland. The language is considered endangered but according to Fabrizio Brecciaroli, one of the contributors to Inari Sámi Wikipedia, Inari Sámi is globally one of the most successful examples of revitalisation of a very small and endangered language.

Some 25 years ago there were no child speakers and only a couple of young speakers. Today there are three language nests where only Inari Sámi is spoken, and children can attend their primary school with Inari Sámi as the teaching language. One of the strong motivations to create an Inari Sámi Wikipedia is giving the schoolchildren a site to find information for for example school projects. Fabrizio Brecciaroli, contributor 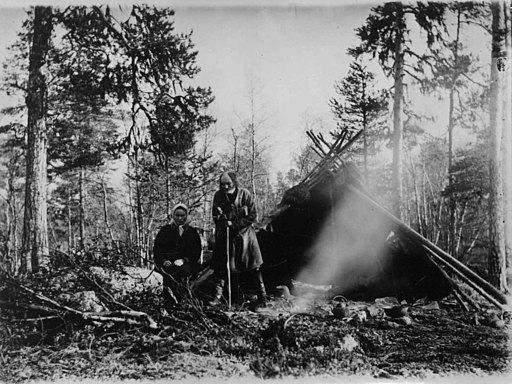 The Inari Sámi Hendo-Anti with his daughter in front of the tent. Eidsfjell, Pasvik, Sør-Varanger, Finnmark, Norway, before 1902. This image is a part of a mass upload of Sámi cultural heritage photos done by Norsk Folkemuseum and Wikimedia Norge. Ellisif Wessel, Public domain, via Wikimedia Commons

The first step in setting up a new language version on Wikipedia is the Incubator. Anyone with knowledge of a language can do this. The procedure and requirements are listed on the incubator page. Here, the new Wikipedia can be edited like a normal Wikipedia. This is a good time to start building a community among the contributors. Fabrizio describes the Inari Sámi community to be small and close-knit, where everyone knows each other.

There are about 7–8 people who have contributed with varying degrees of involvement to the creation of the Inari Sámi Wikipedia. I started in February 2020, and I have written content for the Inari Sámi incubator every day ever since. Fabrizio Brecciaroli, contributor

As the new Wikipedia grows in the Incubator, it is time to consider a hatching date. Inari Sámi is the latest Wikipedia to be approved, following 4 others this year. The last 5 years between 4-6 new language versions of Wikipedia have been approved yearly. It is the language commitee that decides when an Incubator project is ready to become official. The committee currently consists of 14 people, and they are a mix of linguists and active Wikimedia volunteer contributors. Jon Harald Søby, who in addition to being a Wikimedia Norge employee is also one of the members of the language committee, says:

As detailed in the language proposal policy, the main criteria for getting a Wikimedia project in a new language are having sustained activity in the Incubator from several users over time, and having the most important interface messages translated into your language. This is to ensure that the wiki can stand on its own two feet after it has been
created, and to show that there is a community that can build and maintain it.
Jon Harald Søby, project manager Wikimedia Norge and member of the language committee

Working on the incubator has been a great and rewarding experience and I cannot wait to see our Wikipedia reach new heights! Fabrizio Brecciaroli, contributor to Inari Sámi Wikipedia.